I have seen a lot of ballot papers over the last two days. When the Ealing ballot boxes were opened on Thursday night they were sorted and counted to confirm the number in each box. At this stage it was possible to see the papers and take a straw poll of the result. It was clear before midnight on Thursday that the Tories were in trouble locally. The local papers were then put on one side until 1pm on Friday and they proceeded with the general election count.

Again on Friday afternoon the election agents and candidates oversaw the counting and we got to see thousands of ballots again. Something like 4,800 out of 6,800 votes in Northfield ward were “block” votes where people had voted for a full set of their chosen party’s candidates, about 2,400 for the Conservatives, 1,300 for Labour and 800 for the LibDems leaving as many as 2,000 “split” votes. At this point the Northfield councillors knew we were pretty safe. The blocks are easy to count but then you have to untangle the split votes where people have voted for more than one party. The split votes were multiplied in Northfield because the Greens put up a single candidate so many people split their votes across the one Green and two other candidates from another party.

There were only a handful of spoilt ballot papers but still 6% or one in sixteen of Northfield’s votes were wasted. 6,786 people voted in Northfield but only 19,136 votes were recorded. 1,222 votes went missing. Where?

Too many people only voted once. Clearly they had not read the voting instructions. I can’t imagine this was intentional. You might understand why a diehard Green might only vote once but this was very rare. Many people voted for only one mainstream candidate, a mistake surely? This seemed to affect the LibDems in particular. New, young voters?

I saw at least two papers where someone had put three small crosses against their favourite candidate thinking this would give them three votes – only one was counted. I saw one paper where someone put 1, 2, 3 against three names. This would have counted. I saw about ten ballots where people had crossed over the numbers in the left-hand column. These would have counted.

I saw lots (probably hundreds in total) of bingo ballots where three people from three different parties were chosen. It is hard to divine what someone is doing with that. Showing frustration? Showing their lack of decisiveness?

We should think carefully about these wasted votes. 6% is a lot. The number was perhaps larger than it would have been if the local vote had been on a separate day. But the fact remains that with a relatively simple voting system 6% of votes are lost.

I noted back in May 2008 that the transferable vote system used in the London Mayoral vote had similar problems with 1.7% of first preference votes (equivalent of 41,000 London voters) for Mayor being wasted. It seems the locals are even more wasteful.

It is likely that over the next few years that many hours are going to be spent debating and implementing more complex proportional voting systems for our country. In the process many, many people will be disenfranchised as the voting system gets more complicated.

8 replies on “One in sixteen votes lost”

How about the 23% of Lib Deb voters who are disenfranchised under FPTP?

‘How about the 23% of Lib Deb voters who are disenfranchised under FPTP?’

Under that rationale, anyone who voted for a candidate who didn’t win was ‘disenfranchised’. In reality, their candidate lost, fair and square, under rules that have been in operation for centuries.

A significant number of the electorate do not understand voting in local Govt elections, and this number seems to increase over the years.

It is quite standard for voters to believe they must choose one from each party, or to vote 3 times for the same candidate, or to rate them in order by number, or to believe that party literature is wrong because ‘we only get one vote, not three’.

After 25yrs of being an activist, I’m getting quite fed up with this stupidity!

“Under that rationale, anyone who voted for a candidate who didn’t win was ‘disenfranchised’.”

OK you pedant. LibDem voters *do* have a right to vote, but they might as well not bother if you look at the statistics. Check out the stats: 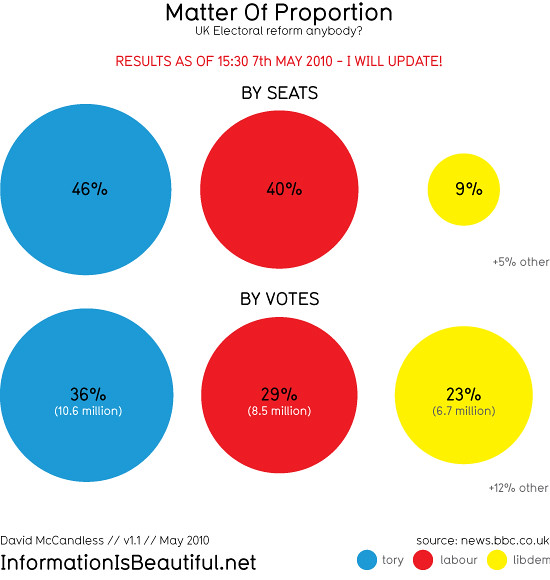 The current voting system is totally unfair in a three party system. Not that the Tories care.

Who cares if the system is ancient? It’s broken.

Here in Newham the election was even more complicated than in Ealing because we have an elected Mayor with the same Supplementary Vote system used for the London Mayor, and so voters were given three different ballot papers that used three different systems. There was a public information campaign here about the three systems but it was clear from the count that large numbers of voters were using the wrong systems with many parliamentary ballots having three votes on them.

It’s also of note that just about everywhere that had long queues and people unable to vote in time appears to have been a London or metropolitan borough where there haven’t previously been combined general and council elections for at least thirty years. I suspect a lot of people took longer to vote because of all the confusion and this inflated queues.

Having multiple elections on the same day may seem like a solution to turnout problems, but it also means voters are being given so many different ballot papers with different instructions, whilst national & regional media coverage of the local elections was tiny. It also seems in some areas (though not all) little thought was ever given to the level of resources needed for the elections under such circumstances.

Surely this is an argument for PR, on the basis that it excludes moronic voters from the process.

A similar thing occurred here in Scotland at the last elections where they combined the local and assembly elections. They use different systems for the two and to add to the confusion they brought in a new system for the locals. And it was’t just numpties who were confused. My wife who has a degree, is an accountant and corrects VAT inspectors was confused.

Each new system takes the person you are voting for further and further from the electorate. We have a list system in Scotland for the assembly so about half the MSP’s are completely unknown because their constituancy is not the electorate but the party bosses. FPTP may be be unfair to some but it is simple,clean and makes a strong link to the constituancy.

As an additional comment on the way people voted perhaps they were rejecting what their lord and masters wanted and were making a point when filling in the papers as they choose.

I hadn’t realised it was so many votes that it happened to – are these sorts of figures normally released after election day? It’d be interesting to see what they’re like countrywide.

I was at a GE count last Thursday in a constituency where there were no local elections taking place and someone had ticked three different boxes. Obviously a far rarer occurrence.