I saw this story on the Guido Fawkes blog today. He is reporting yesterday’s session of the House of Lords Communications Committee which is currently looking into government comms. The interview with Sir Gus O’Donnell, Cabinet Secretary and Head of the Home Civil Service, starts 58 minutes into this video. Committee chairman, Lord King, starts off by telling O’Donnell off for taking three month’s to respond to the committee’s request for information. Apparently a full submission was only received the previous night. That submission makes for excruciating reading and O’Donnell spends the rest of his time trying to defend the indefensible. 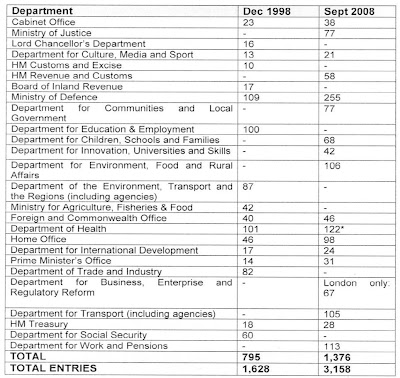 Even these horrifying numbers probably underestimate the true numbers. The Cabinet Office letter numbers Ministry of Defence comms people at 255. compare this to the 1,000 people involved in comms identified by the MoD themselves, see previous posting.

And who does he blame?

Freedom of speech should be promoted – not complained about.
You are fond of figures. Here’s today’s gauntlett!!!
Disregarding politics, by how much has Ealing Council increased its staff in the same period, INCLUDING all those who carry out regular Council services in the capacity of Subcontractors or organisations subsidiary to but answerable to the Council before those services were outsourced?